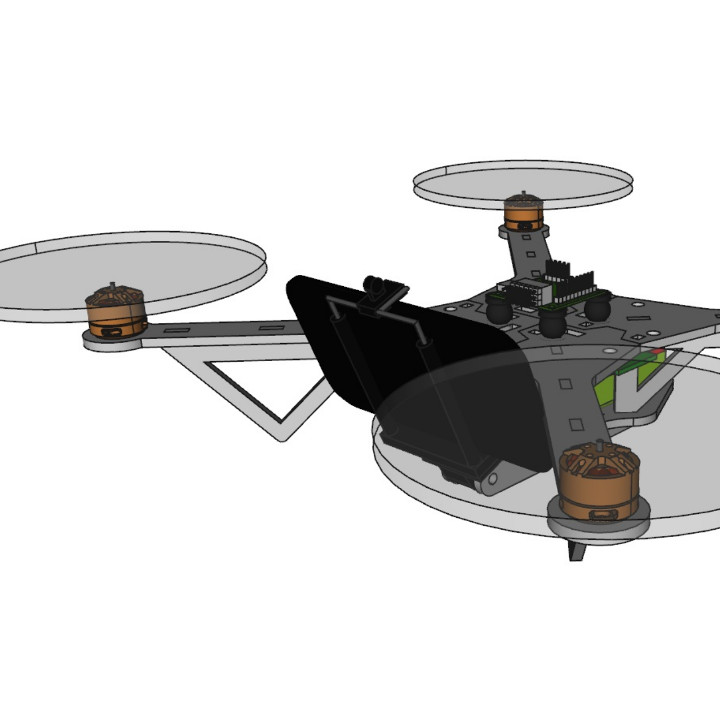 The motivation for this project was to build a minimalist quadcopter platform to carry a smartphone up in the air. The smartphone can not just capture videos of the flight, but could also be connected to the flight controller and become a cheap, powerful and accessible platform for autonomous drone projects. Despite offering a long-range remote connection to the drone through mobile internet, modern smartphones come with a range of sensors (such as GPS), decent processing power and access to many useful libraries (OpenCV, TensorFlow, etc).

When I started the project in 2015, I could not find a suitable frame that was specifically designed to carry a smartphone, so I designed one by myself. I used one end of a selfie-stick as mount for the phone. Based on that, I made several design iterations and experimented with different materials. The goal was to create a lightweight, disposable frame that can easily be lasercut.

Components that were used as a basis for the project

Since our research group was working a lot with acrylic for their fabrication projects and we had lots of that stuff laying around, I decided to give it a try and made a first prototype from clear acrylic. However, this turned out to be a very bad idea, as acrylic is quite heavy and brittle. The first cracks in the frame already appeared after a few flights. Though it looks very cool, I can not recommend acrylic as a frame material!

Frame being cut with the laser cutter.

Mounted drone (here: with a GoPro camera instead of a phone)

As acrylic did not turn out to be a good choice, I decided to try poplar. It’s a common material for tinkerers which is very light and cheap. I also narrowed the arms and reinforced them using perpendicular slabs that also function as stands. The overall weight of the body reduced from 280g to 77g. Material costs (assuming you have access to a laser cutter) add up to around 5 EUR. The whole quad takes around 1 hour to assemble. 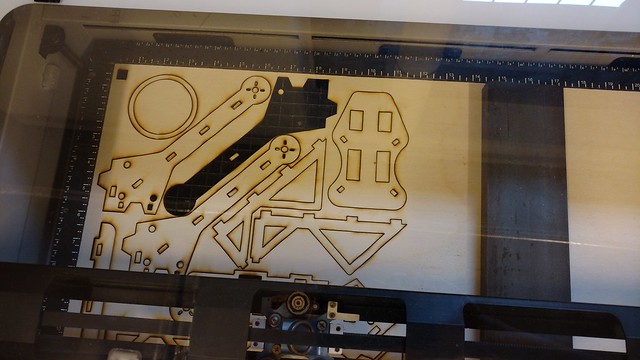 Here is a video that I recorded in Treptower Park, Berlin:

The current design is still far from perfect! It tends to break directly behind the motors and at the stands after tough landings. Some potential points of improvement:
– shorten arms (250 mm diagonal)
– extend stands further outwards to support the motor
– round stands
– improve clamb/glue friendliness
– abandon selfie mount and simply attach it with a piece of rubber
– wider center ring

If you are interested to experiment with the design by yourself, you can download the current version as a FreeCAD model.